What is the Best Rowboat for Exercise and Fitness

What is the Best Rowboat for Exercise and Fitness

This is a question we are asked often at boat shows and on social media. People are becoming more aware of the benefits of exercise and want to be active while they are outdoors. They already know that rowing is good exercise, but what they want to know is what kind of rowboat is the best for getting that exercise and why.

People who are into rowing a boat for exercise are not thinking about grunting it out while sharing space working out indoors on sweaty gym rugs breathing recycled air.

They think how nice and fresh the air is out on the water. Exercising their hearts and lungs while building massive core strength and burning off a few hundred calories that is simply a byproduct of enjoying themselves. They think that rowing is totally fun and enjoyable, does not stress their knees, and a great way to get fit and stay fit.

However, the boat they use can make a big difference to the enjoyment, quality, and safety of their experience.

The best rowboat for exercise rowing is one that fits the rower, the water conditions where it’s used and has any specialized requirements the owner may want to be included such as the ability to take gear or passengers along. 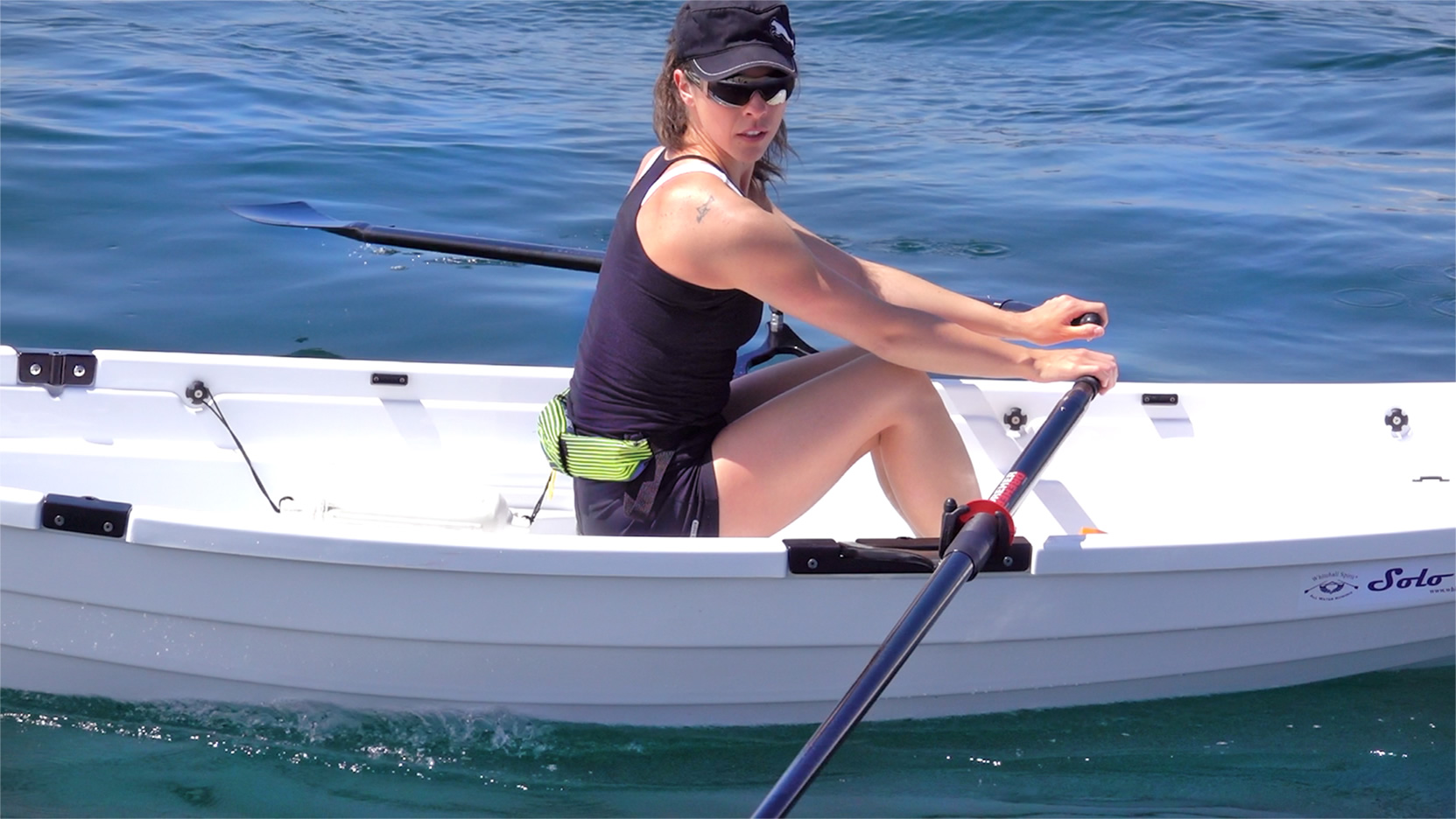 It is imperative to note that for exercise, fitness and a full body workout, having a proper sliding seat or sliding rigger setup is essential. With this kind of gear the power of both legs used together supplies over two-thirds of the thrust, with the back and arms supplying the other third. Almost 90% of one’s muscles are utilized in a smooth fashion, free from stress on the joints and ligaments. Plus, all of the forces involved are symmetrically distributed on both sides of the body.

In the narrow type of racing shell used for mainly competitive rowing, no personal gear is carried. Even clothing is limited to Lycra type stretch gear. These racing crafts have evolved to be very fast but at the expense of strength and stability as racing shells are fragile and very tippy. The appeal is competition based and these individuals often work out indoors training on rowing machines in sweaty gyms.

Traditional rowboats have been around for thousands of years and like most things have evolved into specialized craft, some of which are great for recreational rowing.

Taking traditional rowboat designs that are proven in the ocean, the world’s biggest test tank, reproducing them in maintenance free, ultra tough, lightweight modern materials, and equipping them with state of the art slide seat sculling gear is undoubtedly the way to go. 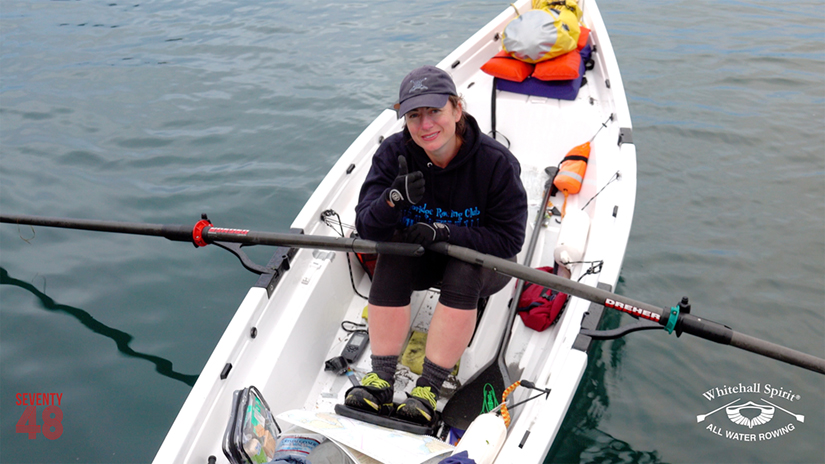 The propulsive power of a single person rowing with sculling oars is about the same as that of two paddlers. An evolved modern traditional rowboat of the right size will work very well for a single oarsman. Such a rowboat has good stability, maneuvers easily, and moves efficiently over a broad range of speeds. With a larger open interior, it is easy to store cameras, fishing gear, snacks, extra clothing, etc. within easy reach.

Here are some important qualities that make a good exercise rowboat:

Some people may be disappointed with the idea of rowing anything less than the fastest thing available. However, it’s a mistake to think that you need a fast boat like a racing shell to get good exercise. The reality is that you can get the same or even better quality exercise at a slower pace with the higher resistance of a more seaworthy traditional boat. With a faster boat, you may move through the water faster, but you will have a higher stroke rate with less resistance. In a traditional boat, you will burn the same amount of calories and work your heart and lungs at the same level using a lower stroke rate with higher resistance. And you will likely find the slower pace much more enjoyable.

Most rowboats fall into one of two types: traditional rowboats, or racing-style shells.

Centuries ago, before engines, there were hundreds of traditional working-type boats intended for carrying heavy loads and fitted with fixed seats and heavy short traditional wooden oars. They were heavy, making them hard to row, transport and launch, and wider, with high sides and more wind resistance. 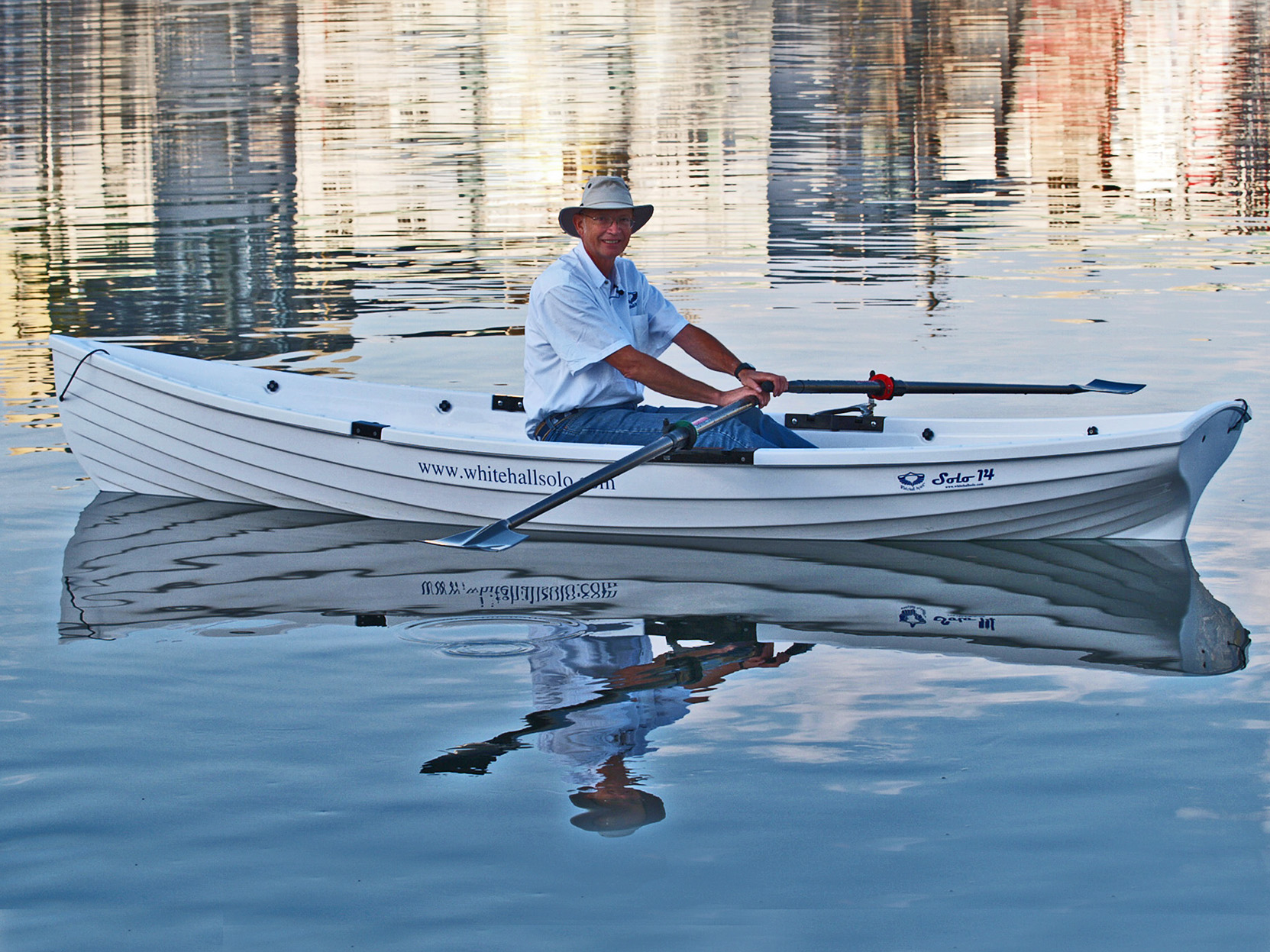 The exception was a design that stood out above all others for its beauty and renowned for speed and ease of handling. This was the Whitehall. This boat was designed not for carrying cargo but for transporting people. It was fondly called the Bicycle of the Sea. Fitted with ergonomically correct modern slide seat rowing gear it’s a top choice for the ultimate fitness rowing boat. Modern Whitehall rowboats are built by my company, Whitehall Rowing & Sail, under the brand name Whitehall Spirit®. The most popular of our many models and prized for fitness rowing is the Whitehall Spirit® Solo 14 and the slightly larger Tango 17. 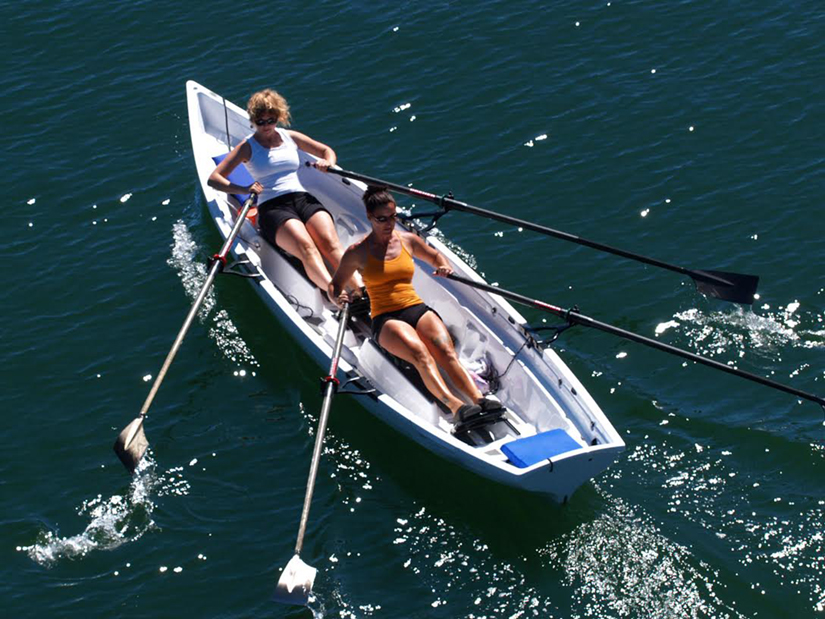 These boats are produced in small quantities, and with high quality, making them comparatively more expensive. But what is your fitness, health and well being worth? At shows, when talking to people, I point out that what you spend on a good boat now, you will likely save on medical expenses later. And in a dozen or two years still be active, fit, still rowing, and still enjoying life.

Regarding racing-style shells and with due respect to the several million shell rowers found worldwide:

When you have just one person in the boat using a pair of oars, one in each hand, this is known, in the rowing world, as sculling. You generate more power with a pair of oars, and it is better, smoother exercise. Rowing makes it easy to go straight ahead because you apply power equally on both sides. The oar blades are farther out from the sides, making it easier to turn. And with two oars in the water you can stroke forward on one side and backward on the other and spin the boat around. Solo rowing in a good design feels kind of like driving a sports car. With only one person in the boat, it will accelerate and stop more quickly. And it will “turn on a dime”. With a passenger or even two others aboard, in a Whitehall design, boat speed will not be seriously affected as once the boat is up to speed the added weight adds to the inertia. Also, the power of using a pair of oars acting as giant levers means turning, maneuvering and stopping is not seriously affected. 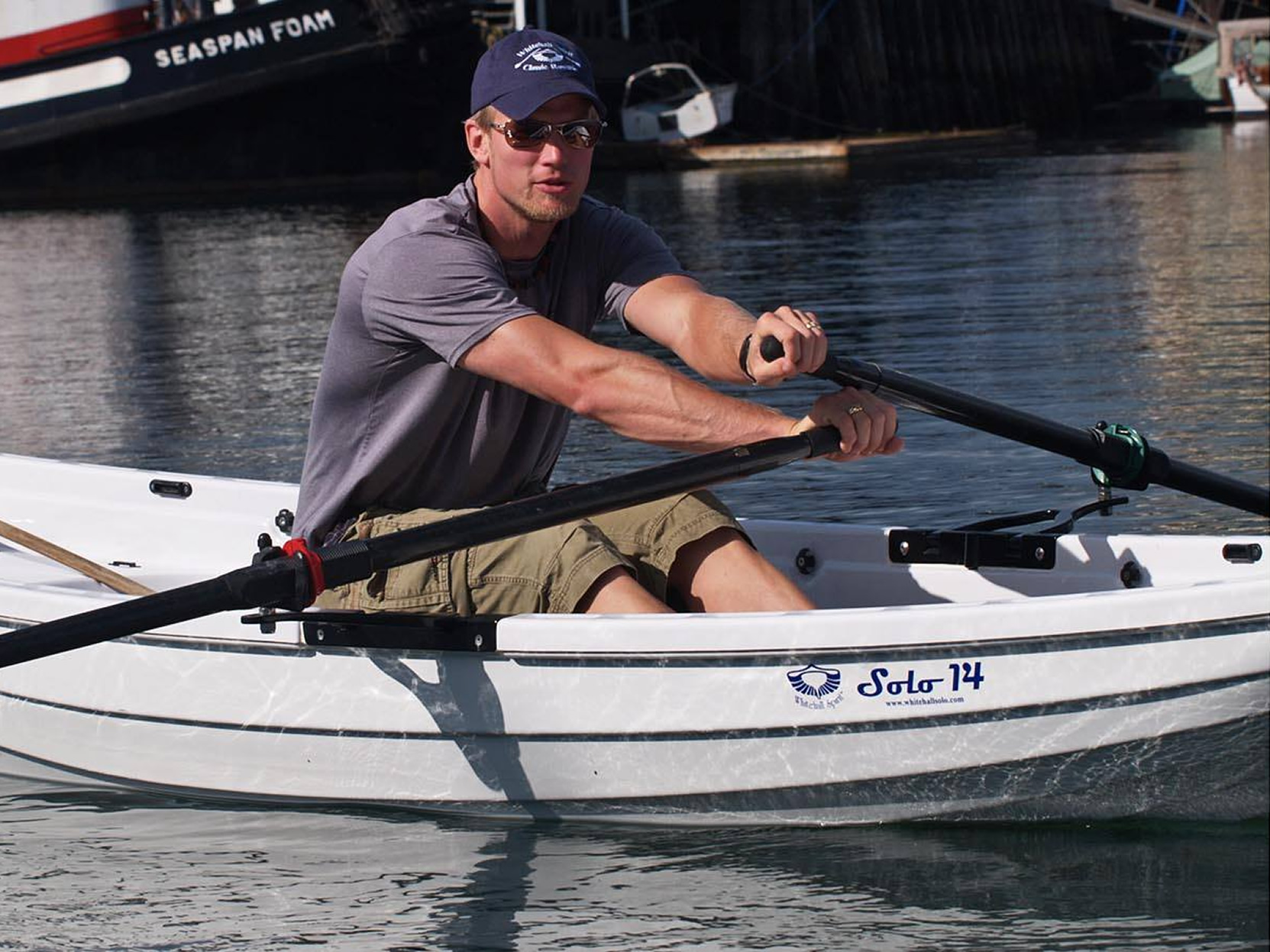 Rowing With a Partner

It’s also totally enjoyable to row a boat called a double that has two slide seat rowing positions. Rowing a double is kind of like doing a slow dance, waltzing across the water with both rowers keeping perfect time matching each other’s stroke with the rear position leading the dance. While some prefer to row alone, many think it’s fun to have companionship while out rowing, plus the power of two rowers stroking together is quite noticeable. Practice makes perfect and it’s best enjoyed once the row stroke moves, maneuvering procedures, launching, docking, and other details are perfected and coordinated. Whitehall Rowing & Sail produces an ideal double position rowboat called the Whitehall Spirit® Tango 17. Even though, as the song says, ‘it takes two to tango’ this boat is also designed to be rowed by a single rower and can also carry a moderate sized passenger or two. 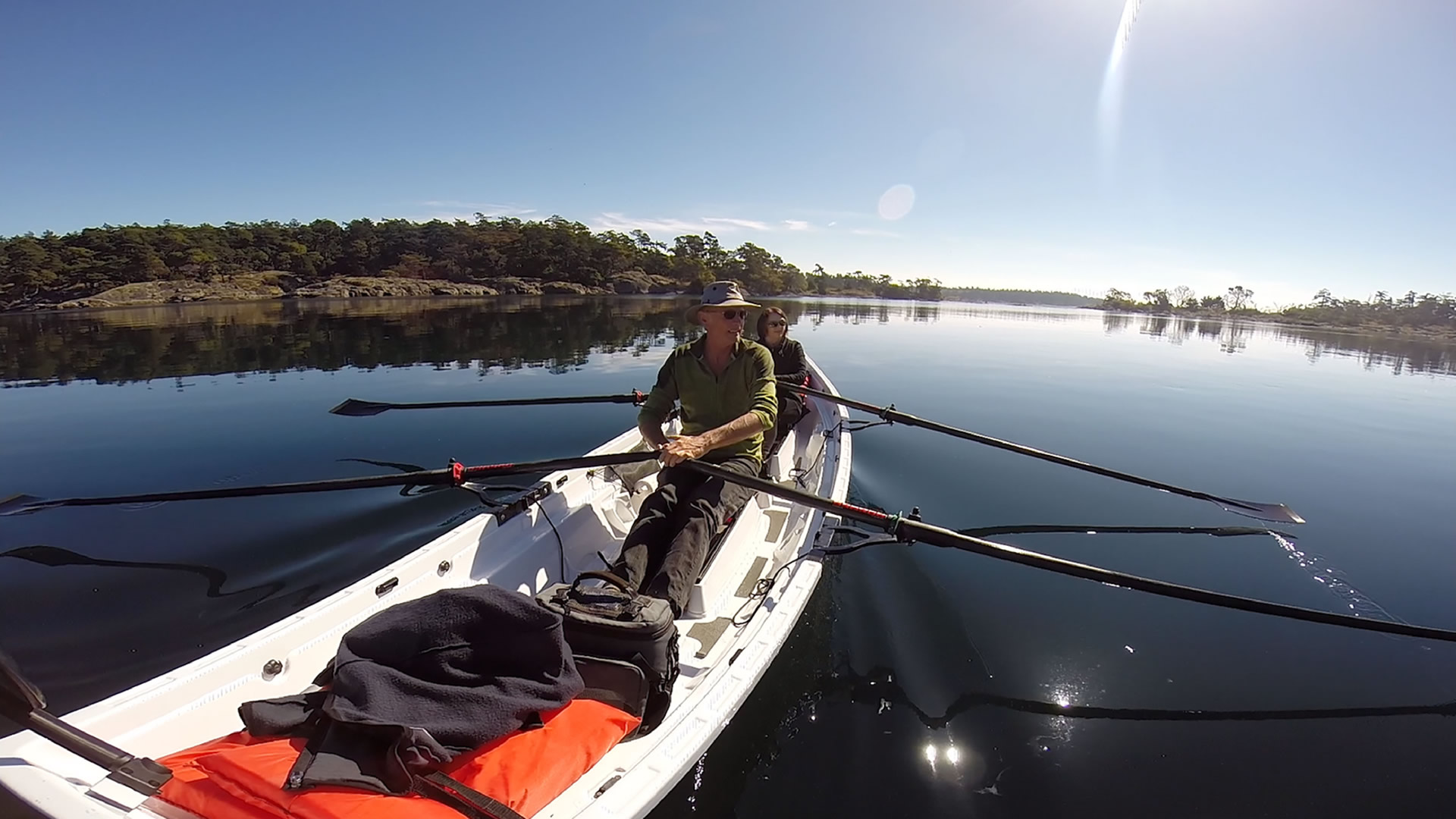 Finally, I’d like to address the phobia some of those unfamiliar with rowing have about moving forward while facing backwards. This is well covered in our ‘How to Row Videos’ but essentially you always need to know what’s in front and also all around your boat at all times. This is not difficult.

As demonstrated in our “Learn to Row” videos, the turn to glance ahead is a special technique involving turning ahead starting from the hips, including the back and neck, done gently without stress. The opposite oar handle can be pushed against to help the turn. This turn to look is very good for the back and neck and over months and years helps prevent stiffening as one ages. When rowing and you feel you need to look ahead again, simply take a glance.

Personally, I have yet to hit anything after over 40 years of rowing in a wide variety of boats and conditions, but I always like to know exactly what’s ahead.

I hope that this has dispelled a few misconceptions around recreational rowing and exercise, and transferred to you some of the experience I’ve gained over my long career in rowing boats of many types.

You are welcome to see the complete line of Whitehall Spirit® rowboats at: www.WhitehallRow.com

The Oar Board® Fit-on-Top Paddle Board Rower

A new and attractive exercise alternative to a full-sized rowboat has been developed by Whitehall Rowing & Sail and is called the Oar Board® Fit-On-Top Rower. Several years ago we looked at the thousands of paddle boards on the water and wondered if there was a way to convert them into sculling type rowing boats. Paddle boards are designed to be paddled while standing up (hence the name standup paddle board or SUP) and are quite stable, much more so than a rowing shell type of rowboat. 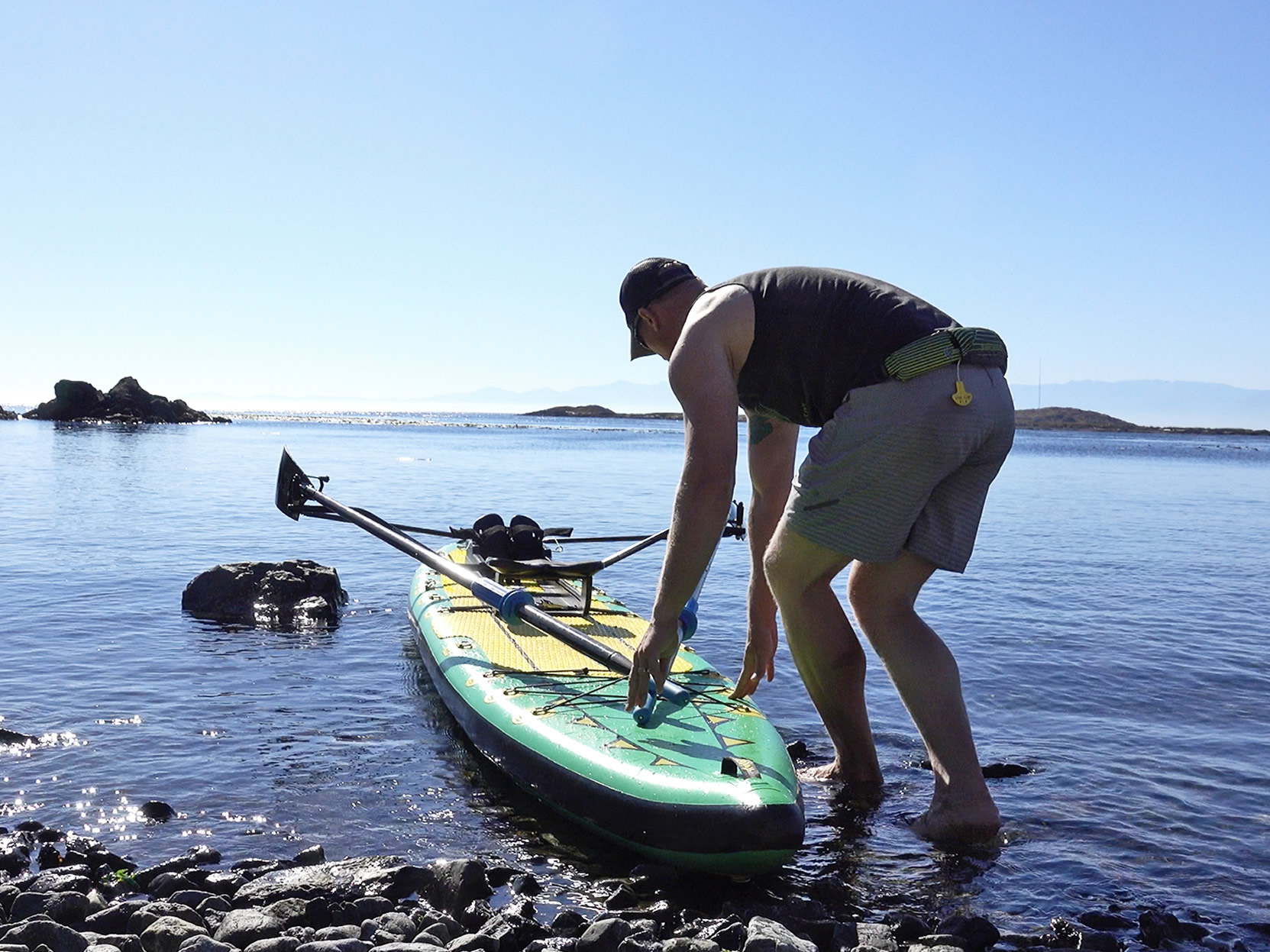 We designed, built and experimented with equipping paddle boards with fit-on-top slide seat sculling setups. Unfortunately, we found the rower’s weight sliding back and forward on the slide seat produced a hobbyhorse effect on the paddle board, with the nose and tail raising and falling with each stroke. This slows the board and feels uncomfortable.

We then designed and tested another approach where the rower sat on a fixed seat and where the rower’s feet were Velcro strapped to a sliding carriage along with the riggers and oars. This produces the same effect as a sliding seat but without the shifting back and forth of the rower’s weight and no hobby-horsing. The glide is smooth and there is no trace of the hobbyhorse effect.

This is not novel technology as we found sliding rowing rig drawings dating way back to 1906. In the late 1980s, the German Olympic rowing challengers introduced a sliding rigger rowing system that proved to actually be a few percent faster than conventional sliding seat rigs. Rather than convert thousands of racing shells to sliding rigger systems, the worldwide governing body of the sport of competitive rowing, FISA, simply outlawed it. Sliding riggers quickly disappeared from the rowing scene. 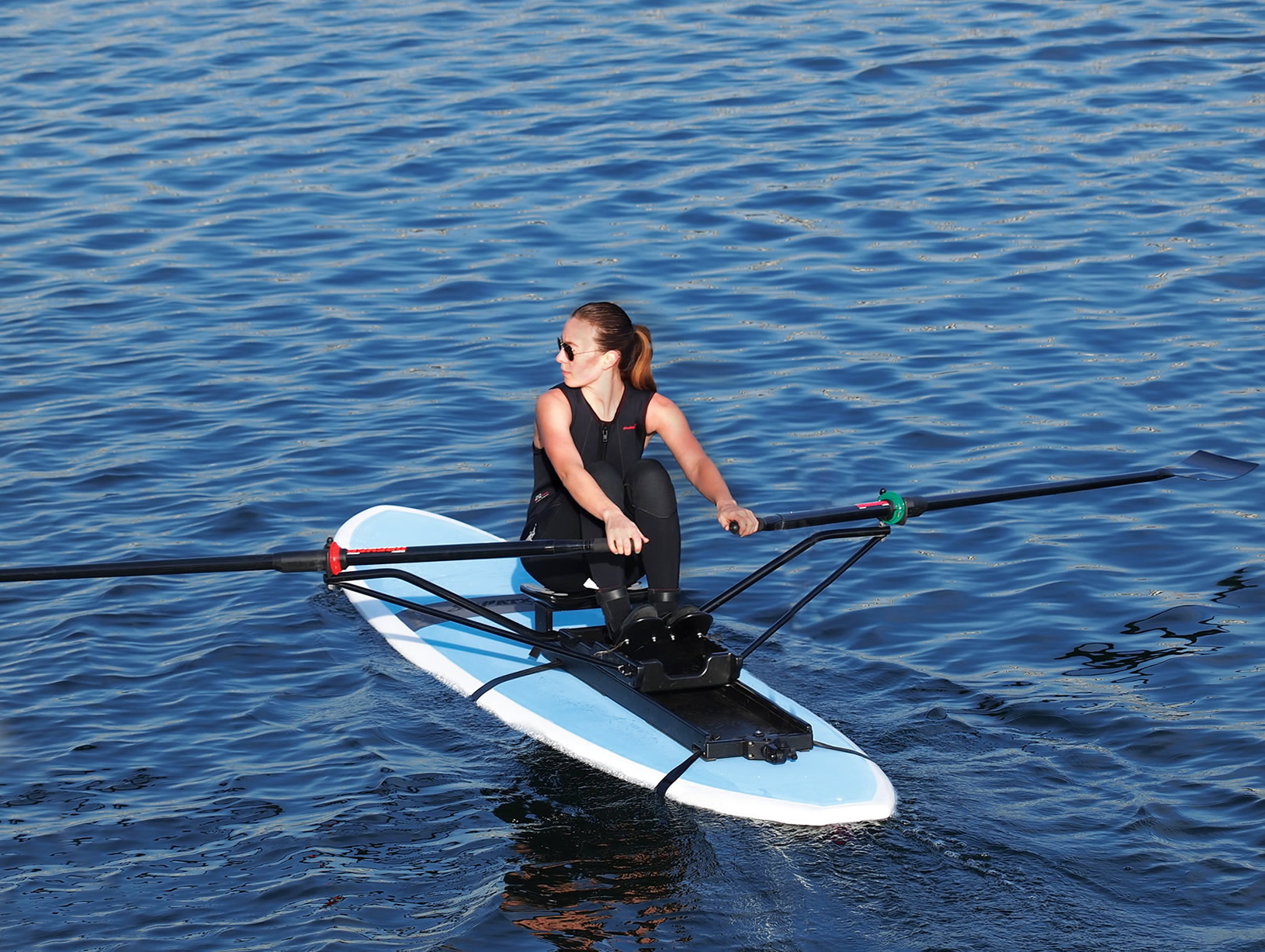 The good news is that the Oar Board® unit is excellent for converting a paddle board over 3 meters (10’6”) into a stable, on-the-water, recreational rowing boat, thus enabling almost anyone to enjoy rowing for fitness and fun.

Being compact and light is very important. The Oar Board® Rower was designed to be great to row and also to be easily and quickly broken down to fit in a wheelie bag for travel and storage. We also designed and produce the world’s first two-part ultra-light carbon fiber sculling oars that come apart to fit in the wheelie bag with the Oar Board® Rowing unit. Combined with our state-of-the-art inflatable Fitness Row & Adventure Row SUPs which roll up and also fit into a small pack, the problems of storage, travel and shipping anywhere in the world are eliminated. 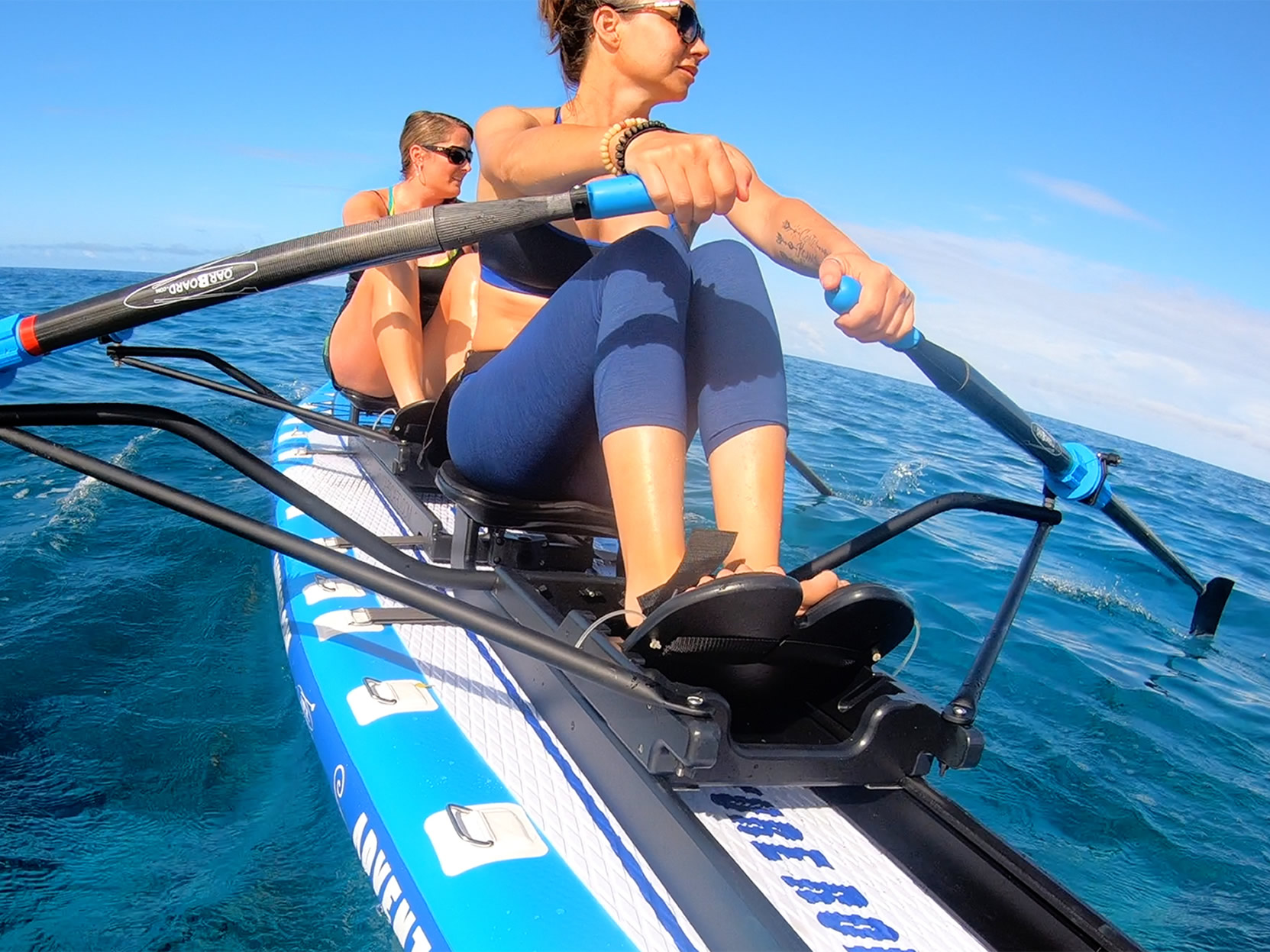 Whitehall Rowing & Sail has shipped the Oar Board®, sculling oars, and SUPs to over 55 countries from its facilities in Victoria BC.

Whitehall Rowing & Sail and its passionate hard working employees are dedicated to getting people all over the world out on the water in safe stable rowing boats while getting fitter and happier.

More information and videos regarding the Oar Board® Rower can be seen at www.OarBoard.com