With his permission, here are excerpts taken from emails received from Whitehall Spirit Solo 14 owner Pete Carroll, who lives and rows out of Southwest Harbor, Maine on the east coast of the United States. These offer a great perspective on one person taking his fitness program outdoors…

“I just rowed 12 miles a couple days ago (the mileage isn’t that extraordinary), but I circumnavigated Great Cranberry Island. The south shore of the island is open to the Gulf of Maine, so you have to choose your weather… still had 6 foot swells (long period)… the Whitehall was great.

I keep it up on my dock and it takes 3 minutes to launch. I’ve casually thought of starting a rowing-club/rental here (as we get huge tourist crowd in the summer) with maybe a fleet of three Solo 14s, but I need to think about it more. Thanks for touching base…” 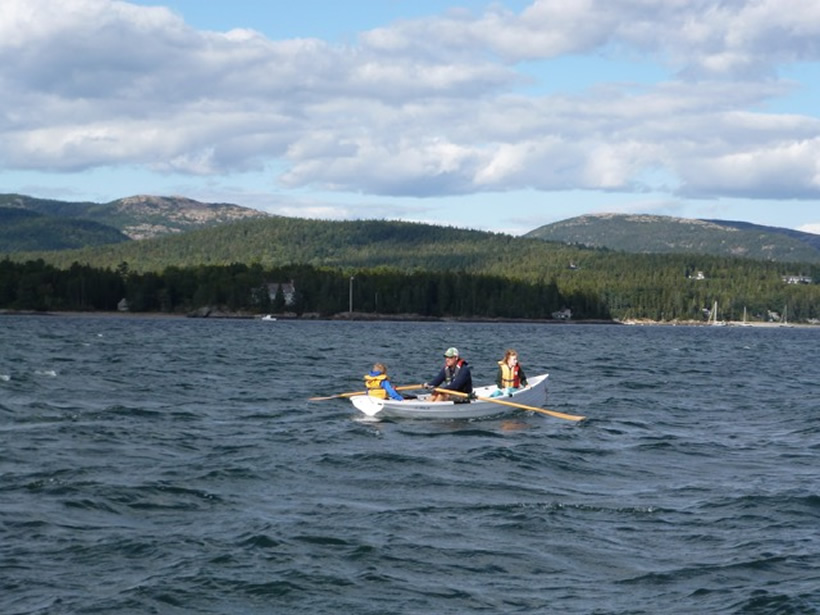 “It’s dry-suit season for rowing now in Maine. It wasn’t purposeful, but I had her in 6 foot near breaking waves (I was scared!), but she didn’t take on a drop of water going into the waves, and in following seas she didn’t have any big tendency to broach. I shouldn’t have been out in this particular stretch with the tide, current and depth of water, but the Solo 14 got me back safely! I carry a PLB, radio, and cell phone (and anchor in case an oarlock breaks). I’m a retired Coast Guard officer, so the last thing I want is the Coast Guard picking me out of the water. 🙂 Fun boat…”

And when asked to provide a reference for a prospective Whitehall purchaser nearby, Pete wrote this:

“Wow… a small world to be interested in the same boat that’s built on the opposite coast! I row the Solo 14 year round (snow, rain, fog, sun, wind, tide). The boat is bulletproof and rows like a dream in all conditions. I row around Great Cranberry, then thru ‘the gut’ and back to Southwest Harbor often, or from SWH out to Little Cranberry, or out the Western Way to Ship’s Harbor, or up to Valley Cove, or down Somes Sound… my ‘quickie row’ is a lap around Greenings, which I actually just did today (when foggy I do the Greenings lap). The boat handles beautifully with seas coming from any direction. I use a dry suit in Winter of course (and PLB, radio, phone, extra oarlock, anchor), but the boat is very stable. I’ve been in the Western Way in rollers with the horizon disappearing and surfing a little bit and it did great. I have several other small boats, and this boat, by far, is used the most. It’s rid me of 30 extra pounds too! As Michael (shared with you), I’d be happy for you to look at or take a test drive in the harbor if you find yourself on Mount Desert. I keep it on a dock in the harbor in front of my father’s house year round. Let me know if you’re interested.”

About the Author: Michael

Michael is the Sales Manager at Whitehall Rowing & Sail and lives in Victoria, British Columbia, Canada. Michael started with Whitehall in early 2016. We immediately turned him loose on our boat sales division. Okay that’s not entirely true – we taught him to row first. He’s also into long distance cycling, tennis, hiking, swimming, skate skiing, and trail running. He has taken to slide seat rowing without missing a stroke. “There is nothing better than starting or ending my day with an hour or two on the ocean rowing with the harbour seals.”