Moving ahead to the present day, the growing interest in fitness and clean, pollution free, outdoor recreation has created a growing resurgence of interest in Whitehall rowboats that are built lightweight, in state of the art materials, and fitted with efficient slide seat rowing/sculling gear.

The largest builder of Whitehall rowboats in the word is Whitehall Rowing & Sail located in Victoria, BC, owned by Harold Aune and Marie Hutchinson. They formerly designed and were builders of custom sailing and power yachts. Their amazingly talented crew has produced thousands of Whitehall rowboats and other rowboat designs under the brand “Whitehall Spirit®”. They custom deliver Whitehall Spirit® boats and other products across North America and ship worldwide, so far, to over fifty countries. 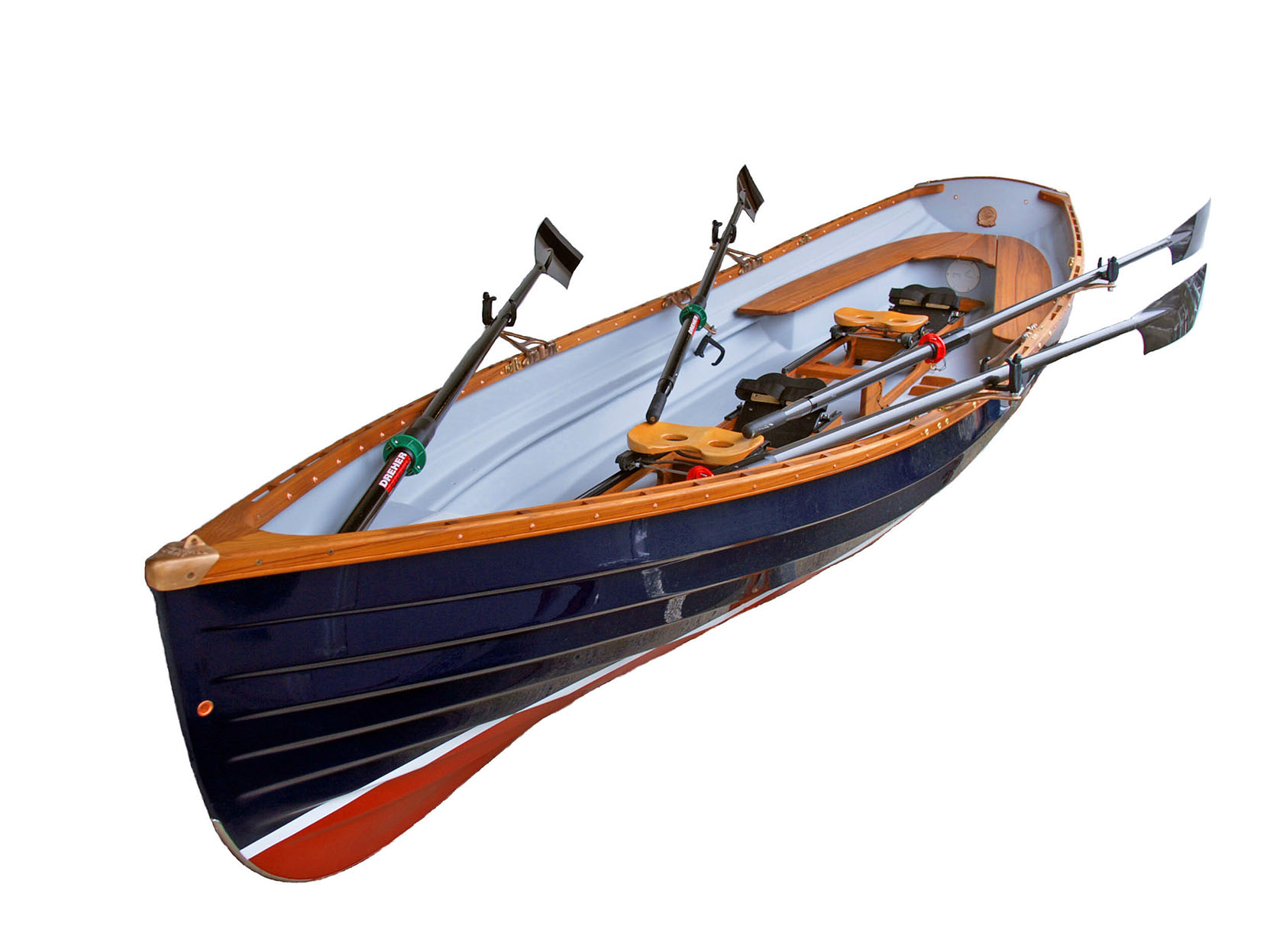 In 1985, while still engaged in yacht building, Whitehall selected the lines of several models from Mystic Seaport Museum’s extensive collection. A boat was produced in wood featuring elegant lapstrake planking, enhancing its already beautiful lines. A molding system was built using this hull as a pattern. This enabled boats to be reproduced in tough, hand laid fiberglass. The stylized lapstrake planking produces a stiffer hull greatly increasing its longevity, up to several generations. Harold and Marie founded Whitehall Rowing & Sail in 1987 once they established there was a viable market for these new rowing boat designs. 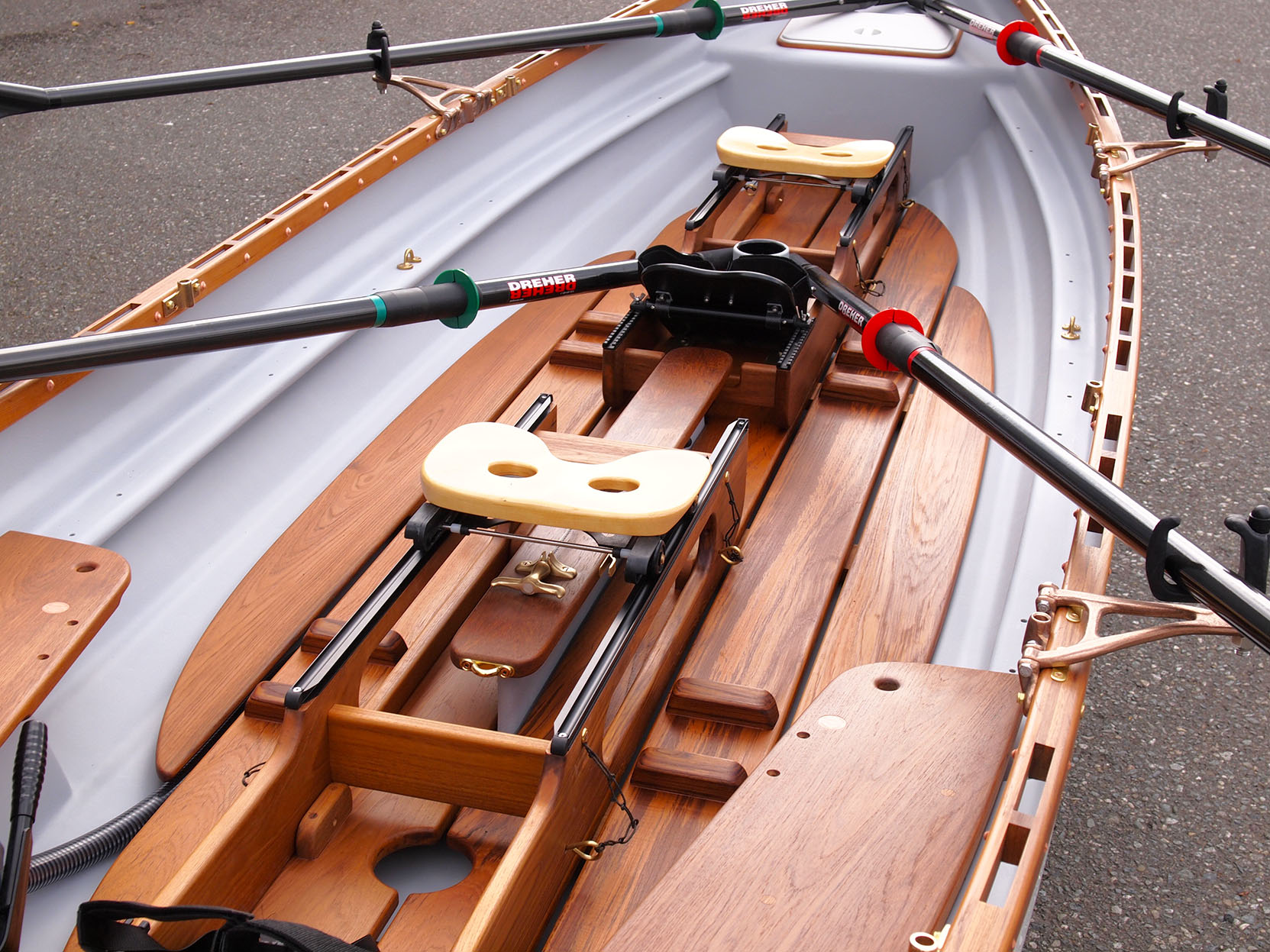 The fiberglass hulls are finished off with meticulous solid teak woodwork and custom bronze fittings. These Classic Whitehall Spirit® boats are a fusion of the fine details and workmanship of the past with the best of modern materials available today. They have the attractive appearance and the superior performance of a traditional Whitehall with much greater durability and easy maintenance. They are often called floating works of art. 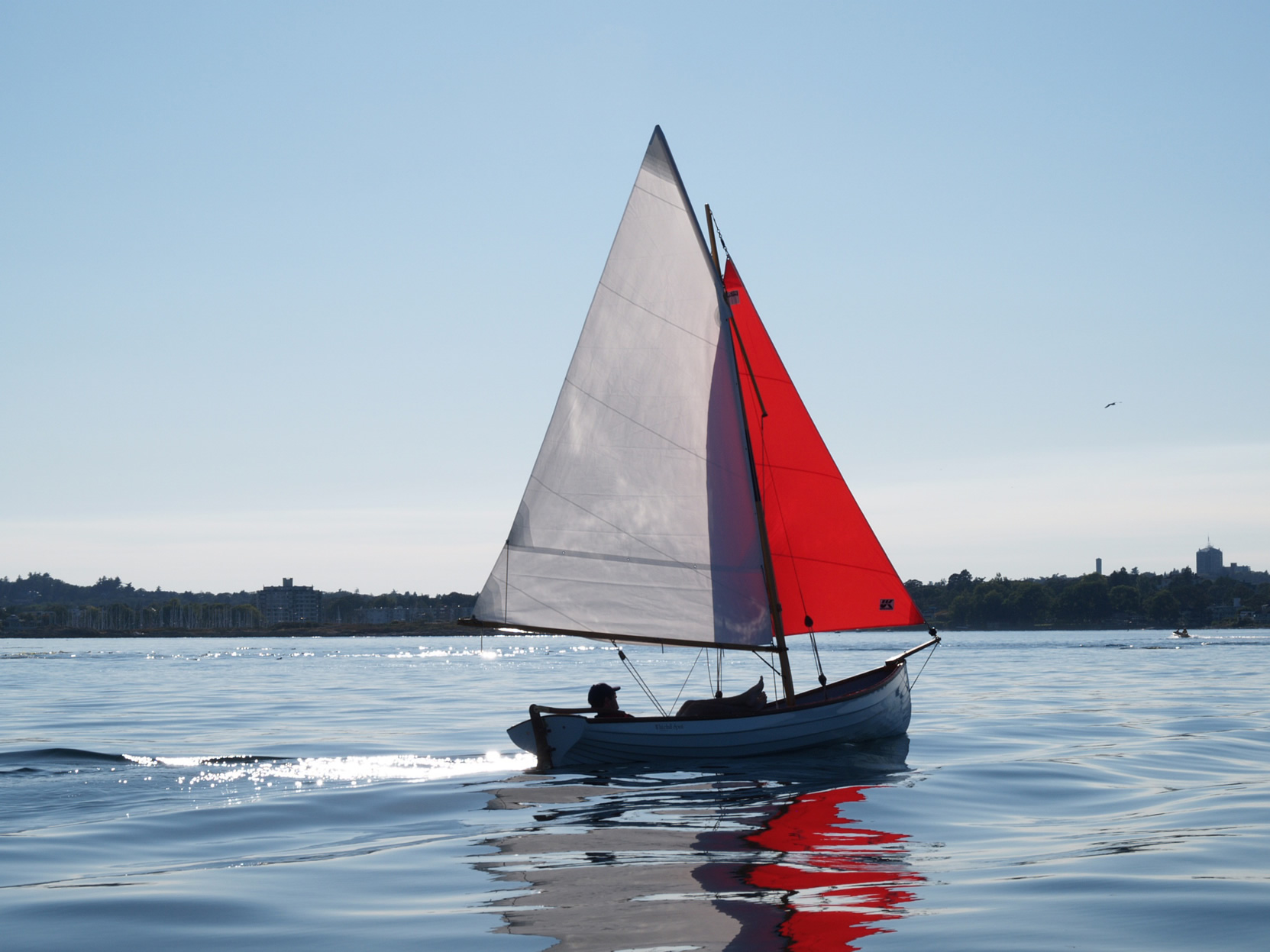 The Whitehall Spirit® line expanded to include a 17’ model, as well as other hand picked designs from the 1900s including the Tyee 14, the Westcoast 11.6 and the Minto 9. These boats are available as traditional fixed seat rowboats with oarlocks mounted on the gunnel, or as sailing models featuring an efficient sail rig that looks like an attractive old gaff rigged ship. The sail rig is actually a type of standing lugsail that’s far easier to handle and set up than a standard gaff rig. The sail can be dropped and furled while out on the water and the free standing mast can be lowered and stowed right in the boat.

By far the most popular Whitehall Spirit® models are the sliding seat sculling boats. Rowing with a sliding seat is called sculling and this technology is usually found on skinny, relatively unstable boats called competitive racing shells. Racing shells are perfectly designed for speed at the expense of being unseaworthy. However, the slide seat sculling gear easily adapts to more sea kindly and stable Whitehall rowboats that can easily handle being out in wind and waves. 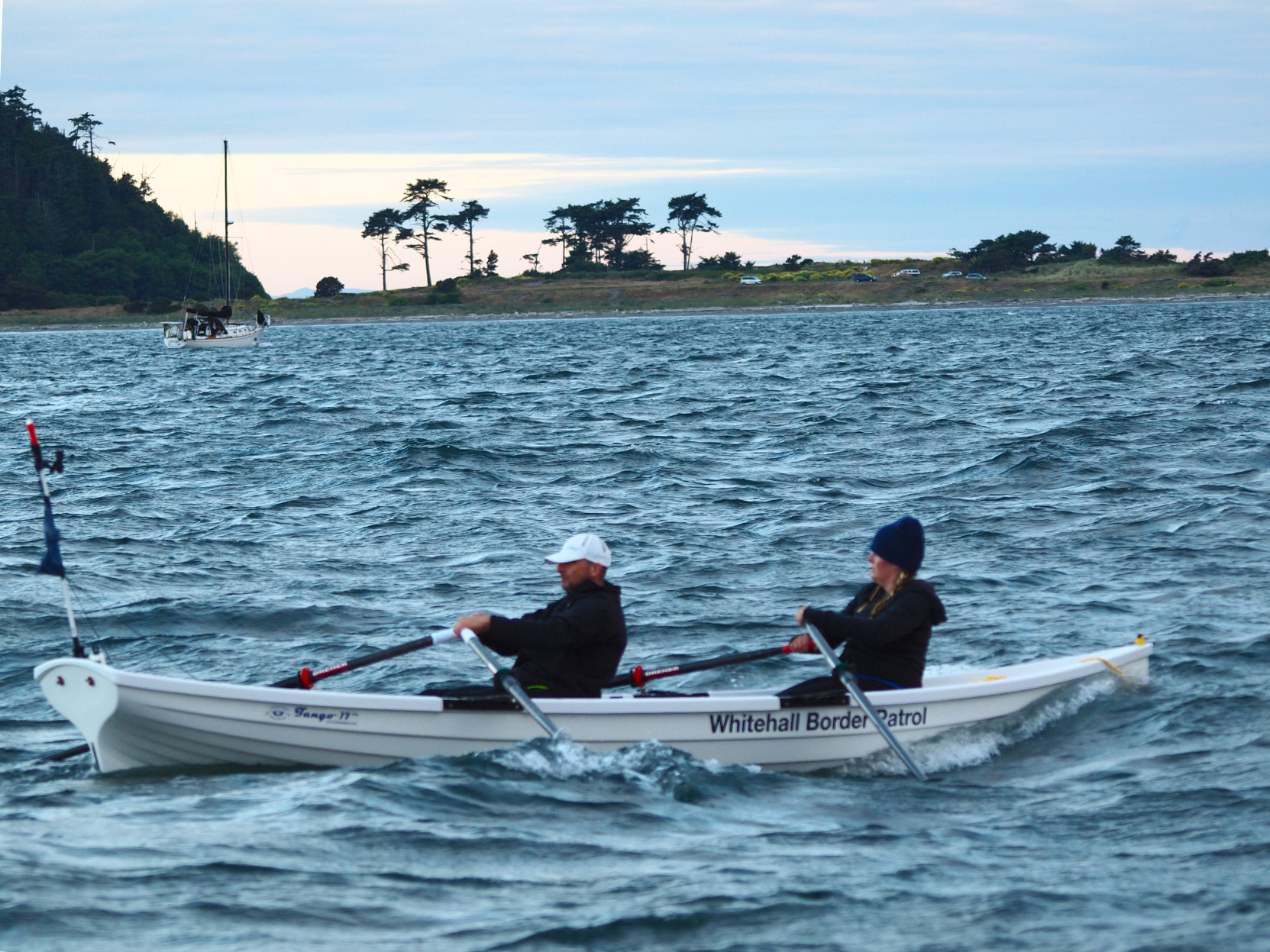 The perfect sculling stroke is a picture of grace and beauty that is seamless in its execution and efficiently utilizes almost all of the rower’s muscles without the high impact on specific joints encountered in activities such as tennis or jogging. Excessive knee strain is eliminated because both legs are used simultaneously to power most of the stroke and used together they share the load.

The fitness and health benefits of slide seat sculling are recognized as one of the best forms of exercise and fitness available. Breathing fresh, clean air while out on the ocean, lake or river in a stable safe Whitehall is also very mentally refreshing and appeals to all outdoor enthusiasts who love being on the water. 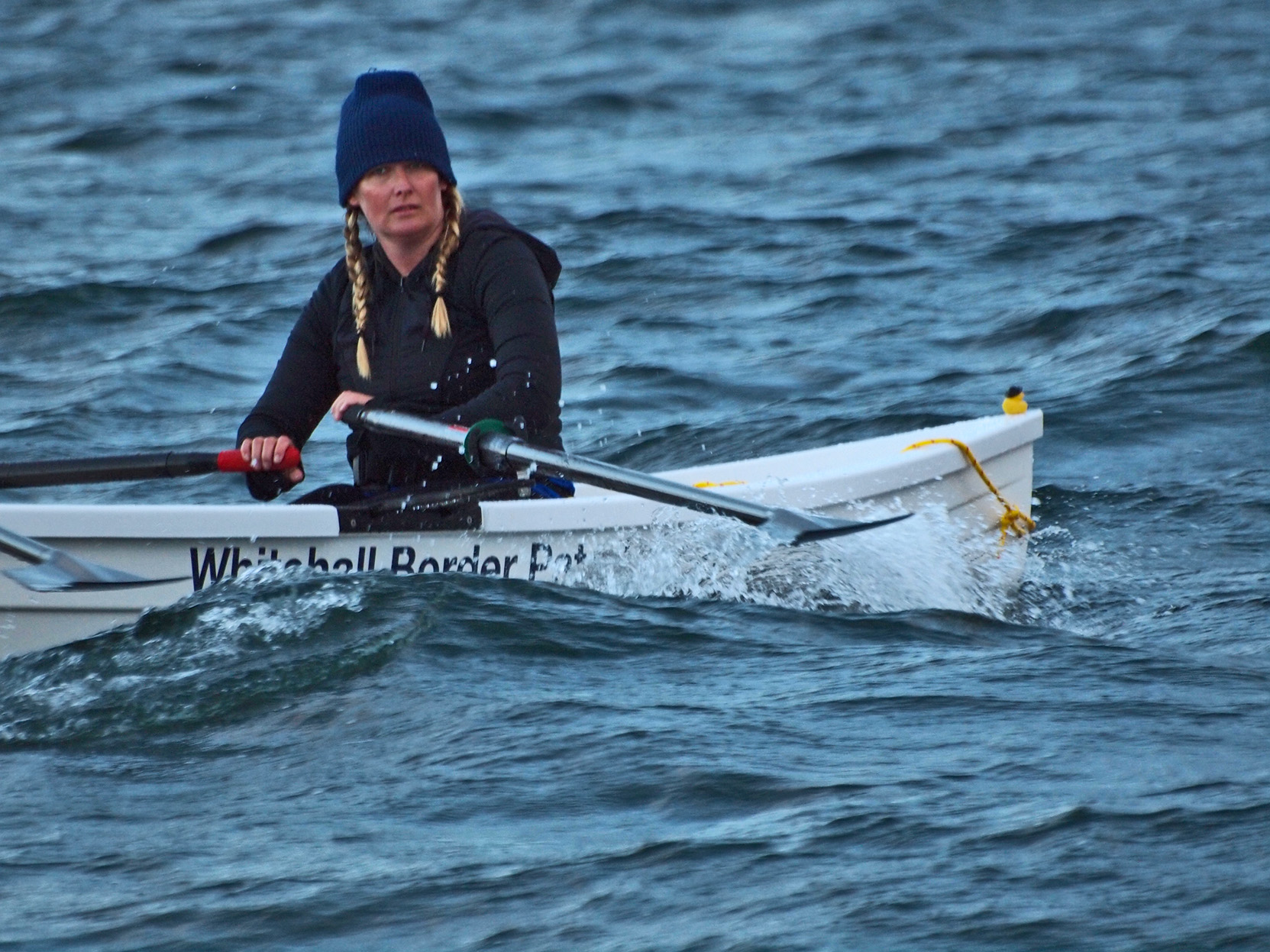 Whitehall Rowing & Sail built over 3000 classic rowboats in fiberglass with teak woodwork before 2007, with the highest percentage of these being the slide seat sculling models. In 2007, rising overall production costs drove prices substantially higher, while consumers called for lighter lower cost boats.

The company then reorganized and started producing Whitehall rowboats using thermoforming vacuum technology, the first time this process was ever used for manufacturing rowboats. This process offers faster production with less specialized labour. The medium utilized is copolymer, a tough light impact proof plastic that requires little to no maintenance stays shiny indefinitely, and is also UV proof. They now produce two models of a Whitehall rowboat based on the highly successful original fiberglass models called the Solo 14® and the Tango 17®.

Both of these state-of-the-art copolymer rowboats are produced under the Whitehall Spirit® brand. Both feature slide seat sculling gear and hinged outriggers that extend the distance between the oarlocks to a standard measurement used by all sculling boats worldwide. This means that the sculling oars are interchangeable from boat to boat whether it’s a competition racing shell or an all water rowing boat. As their names suggest, the Solo 14 has one slide seat rowing station and the Tango 17 has two positions, although both models can easily carry more people, dogs, crab traps or fishing gear if required. Whitehall Rowing & Sail has delivered these boats to thousands of owners located in over fifty countries who enjoy rowing these modern Whitehall Spirit® rowboats.

Whitehall Rowing & Sail still produces Classic Whitehall Spirit® rowboats in fiberglass and teak wood, however, the Solo 14 and the Tango 17 have taken over the bulk of the market-share. 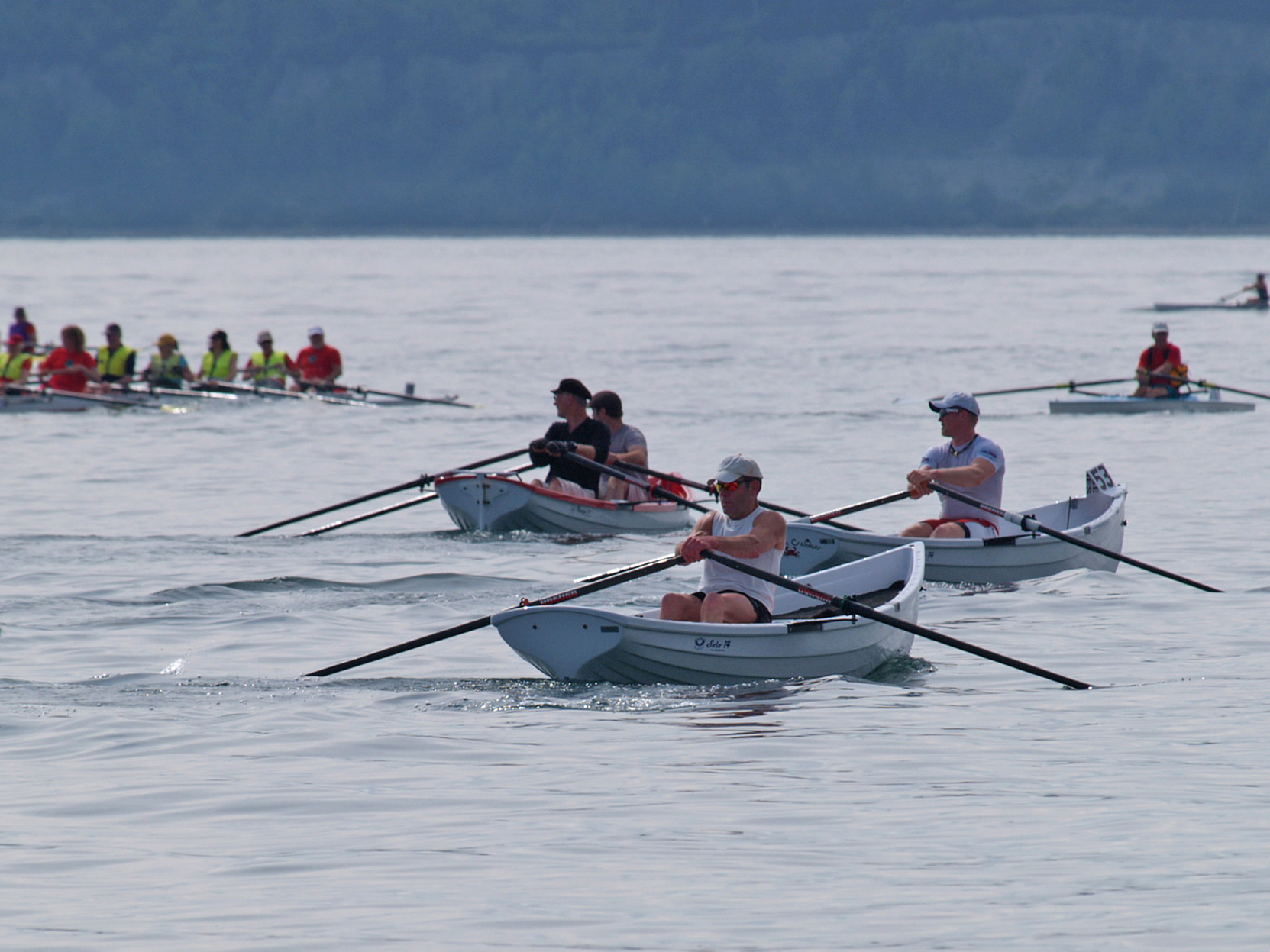 Racing Whitehall rowboats has also been revived as a sporting activity in a new way. Quite different than that done in the century before last, when it was an on-the-water horse racing type of event. Now there are long distance open water rowing races of up to 40 miles long. On the east coast of the United States, there is the Blackburn Challenge and out west there’s the R2AK (Race to Alaska). 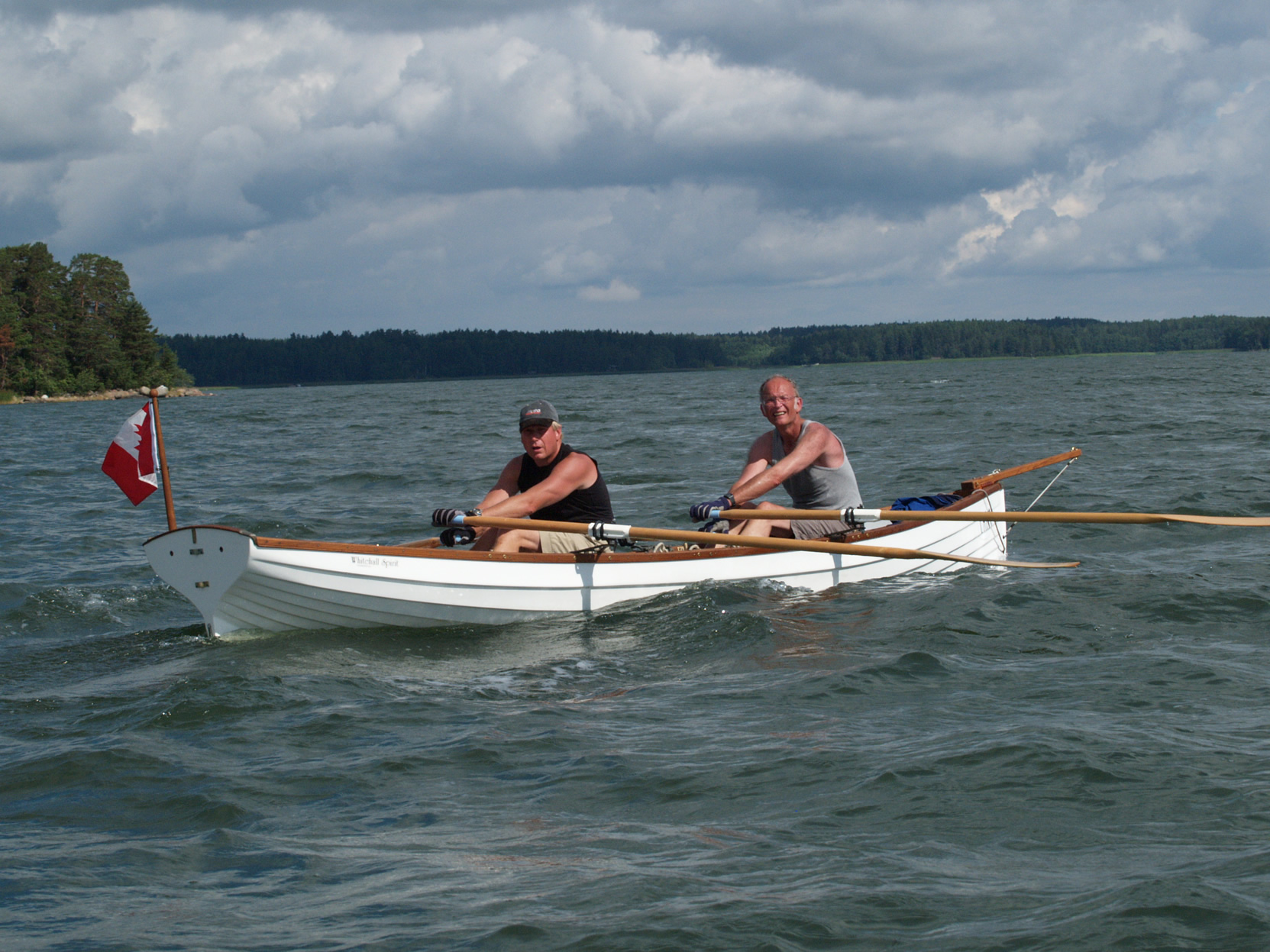 For the past three years, the R2AK has attracted a small fleet of Whitehall all water rowboats. Leg one is from Port Townsend, Washington USA to Victoria, British Columbia Canada across the open waters of Juan de Fuca Strait. The race teams easily cover these distances in under nine hours, rowing nonstop. This type of racing is not for novices, as occasionally very rough water is encountered as can be seen in the 2015 R2AK race video.

Expedition style rowing is another activity that Whitehall rowboats provide that include both fitness and adventure. Expeditions can be short duration, overnight adventures or ones of a thousand miles long, such as this trip by Charlie Parks rowing from Skagway, Alaska to Seattle, Washington and lasting several weeks. The excellent carrying capacity of the Whitehall enables food and camping equipment to be carried aboard with one or two rowers on the oars. 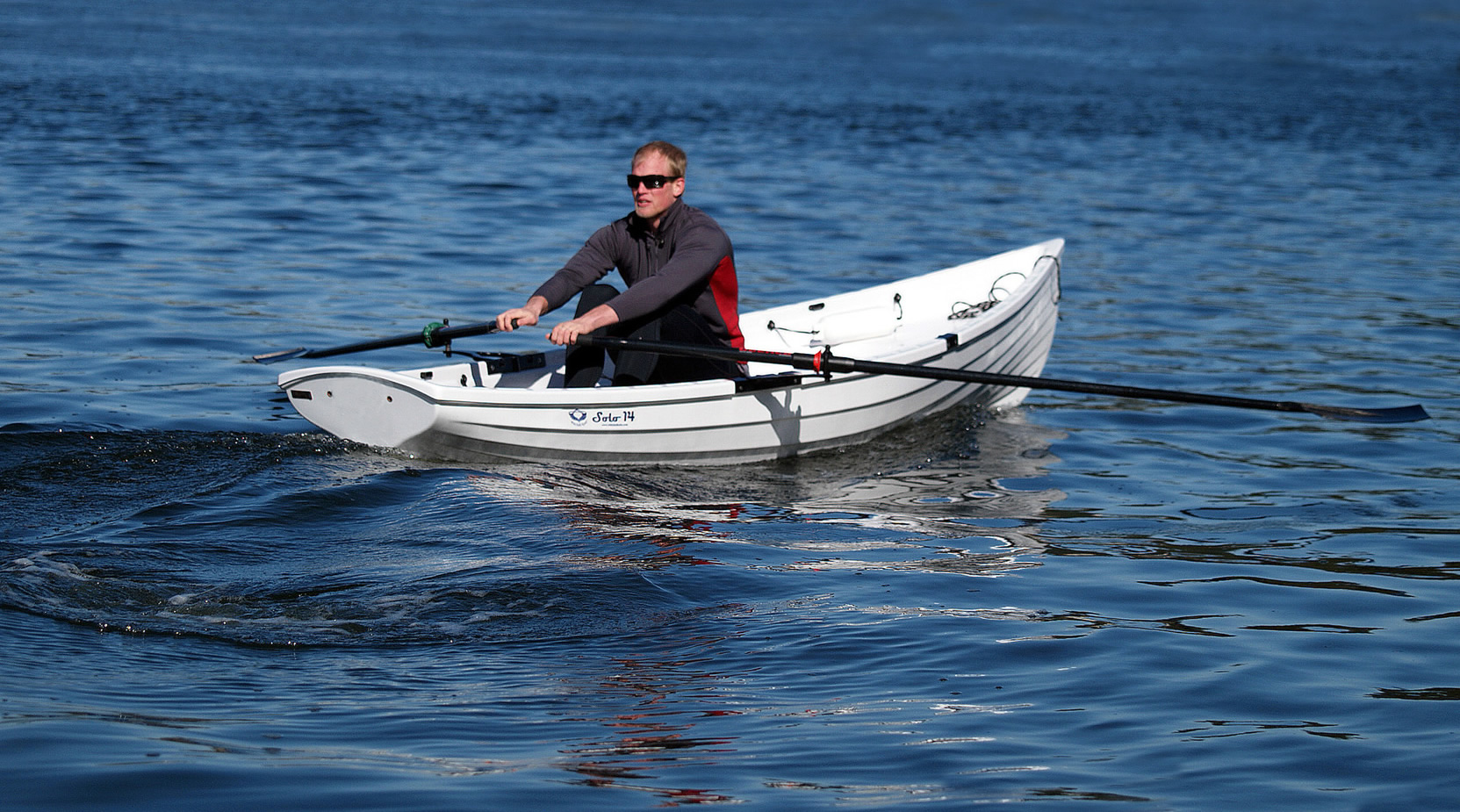 Looking back at the past and on towards the future, it can be stated that the Whitehall rowboat is a classic, legendary small craft that reached its first pinnacle of popularity well over a century ago and is now enjoying another incarnation as a stable, safe, fitness and adventure rowing boat. The Whitehall has never been equaled for its combination of beauty, speed, and seaworthiness. It has now returned in an even larger way and is enjoyed and loved by thousands of recreational rowers worldwide. 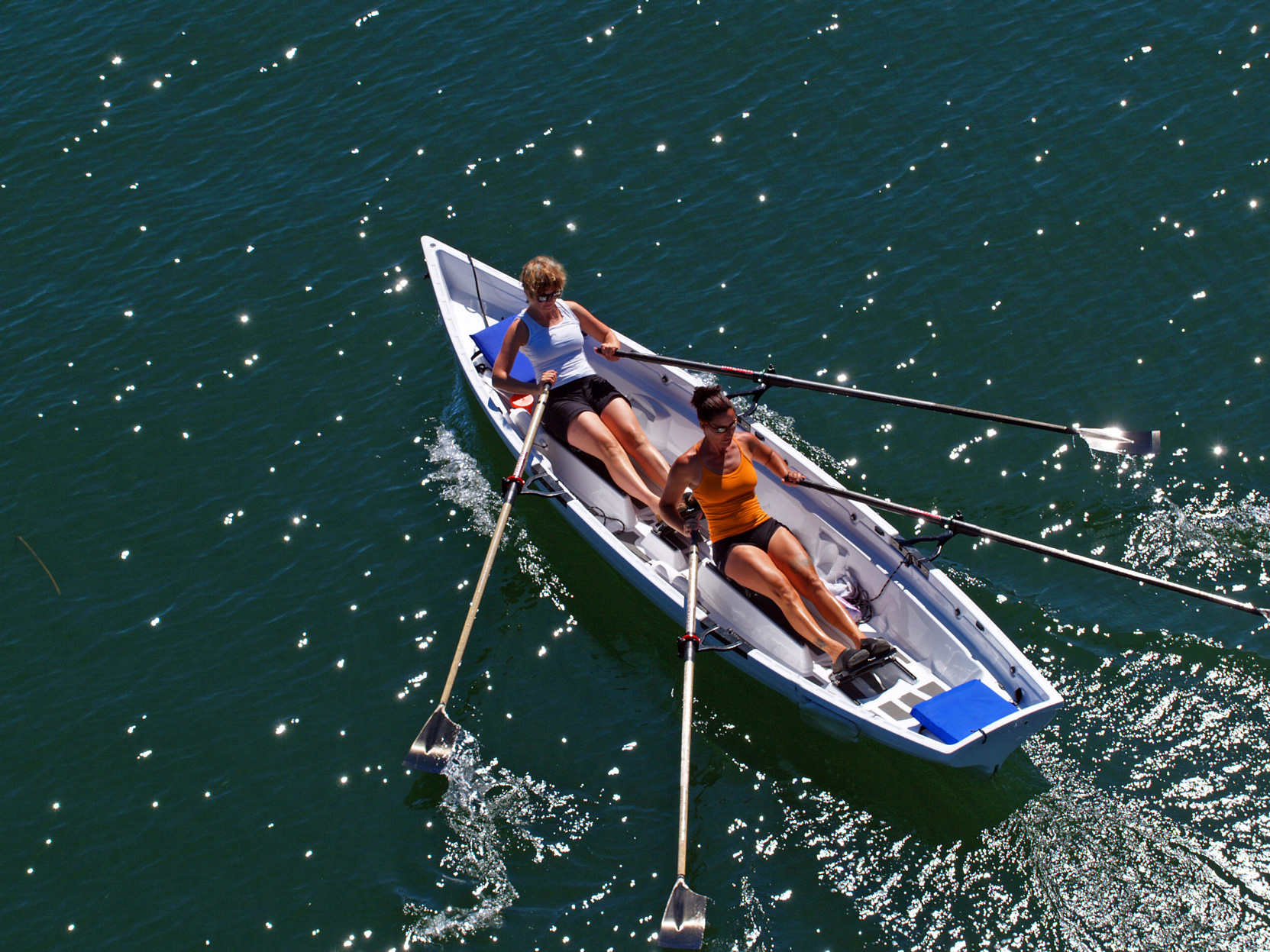